In April 1933, Science Fiction Digest was already a well-established “fanzine,” published monthly and covering the fast-changing world of science fiction.  Since its inception in September 1932, the stapled, letter-sized pages had captured the voice of the expanding base of sci-fi enthusiasts, featuring book and movie reviews, gossip about projects and upcoming publications, and some short original stories. 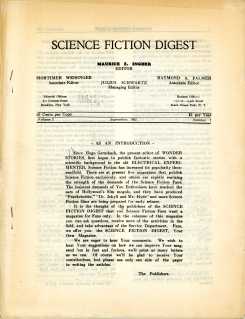 But the April 1933 issue marked a turning point for the ‘zine. The young staff led by Julius Schwartz (age 18) and Raymond A. Palmer (age 23) were anxious to expand into more ambitious publishing of fiction. With Conrad H. Ruppert (age 20) in the saddle as the new editor, a ground-breaking project was announced.

From Science Fiction Digest, April 1933, “The Editor Broadcasts” (pg 10):
“In a few months we are going to present one of the most original ideas ever conceived in the stfield. It’s in the form of a novel, a real masterpiece of science fiction. The plot of this super-serial is so stupendous that one author wouldn’t handle it alone. It races on, in gripping, breath-taking style to its smashing conclusion…”

The excitement built in the May issue with a further glimpse of what was to come.

From Science Fiction Digest, May 1933, “The Editor Broadcasts” (pg 16):
“And Don’t forget the Super Serial which starts in our July issue. Ralph Milne Farley will bring his famous characters of the Radio Planet into the story. Dr. Miles J. Breuer has woven his gaseous beings of Neptune into the plot, Francis Flagg promises us an interesting episode, and–. But, I won’t tell you too much now, see SFD next month for a complete list of the thirteen famous authors who are collaborating on this great story. Nothing like it has even been attempted before, and it will probably never be equaled for many years to come. You won’t want to miss a single installment of this great new novel…”

These tantalizing teasers were followed in the June issue with details of the unprecedented project.

From Science Fiction Digest, June 1933, “The Editor Broadcasts” (pg 17):
“In addition to our regular 16 pages of interesting, entertaining, and informative articles, we will present the first chapter of the Big Super-Serial, COSMOS. This chapter will appear in smaller size, and will be featured as a supplement to our regular make-up…

As each chapter of this great masterpiece, COSMOS, appears you can take out the staples which hold SFD to-gether, and save the chapters separately. When the great novel, COSMOS, is complete, you can have it bound, and it will make one of the most important additions to your science fiction library…

Here are the SIXTEEN Authors, all MASTERS OF SCIENCE FICTION, who are co-operating in order to bring this Great Novel, COSMOS, to our readers:

You don’t want to miss this big event. It’s the most original idea which has yet appeared in the science fiction field. It has the most unusual, stupendous plot ever conceived. Intrigues, adventures, suspense, excitement, crowd the pages of this novel. It is absolutely unique in every sense of the word…”

On this site the story of Cosmos will be told.  More importantly, the full text of the serial is presented, the first time that the story has appeared together in one place.  After its original appearance in SFD, Cosmos was only ever republished by Forrest J Ackerman in the Perry Rhodan series — but again in serial form, spread over 29 issues of the Ace “bookazine” from 1973 and 1974.

Is Cosmos great literature, a classic of the genre as the editors hoped?  You’ll need to draw your own conclusions.  As you’d expect from such a collaboration, the tone and quality of the individual chapters varies widely, and the storyline struggles to remain cohesive.  Exploring Cosmos is more a journey into the times in which it was created, and an opportunity to meet many of the people that shaped science fiction for the 60 years that followed.

The core contributors to Science Fiction Digest proved to be a remarkable group.  Several went on to distinguished careers as leading authors, editors and publishers.  Their colorful personalities, intense energy and unbridled enthusiasm helped to infect an entire generation with the thrill of imagining the future.  Through the original Cosmos project, they achieved a new level of notoriety and visibility that was key in launching their later careers.

As a small sample:

hwartz (Managing Editor) went on to become a principal editor at DC Comics, where he was responsible for the early development of iconic superheroes such as Flash, and oversaw the revitalization of the Batman franchise in the 1960s and the Superman titles in the 1970s.

Raymond A. Palmer (Literary Editor) became the editor of Amazing Stories from 1938 to 1949, where he was instrumental in fostering the early careers of Isaac A

simov and other emerging leading authors. (He was referred for this job by Ralph Milne Farley, the author of the first chapter of Cosmos.) He later founded his own publishing companies and was influential in fomenting conversation and controversy through coverage of UFOs, spiritualism and other arcane topics.  He notably was the first to publish in 1948 Kenneth Arnold’s seminal account of his encounter with “flying saucers.”

J Ackerman (“Scientifilm Editor”) became the most prominent science fiction fan of the 1940s through the 1990s.  He founded the magazine Famous Monsters of Filmland in 1958, and his coverage of the “behind the scenes” artists creating science fiction and horror films has been cited as key early inspiration for such prominent personages as Peter Jackson, Steven Spielberg, Tim Burton, Stephen King and John Landis.  His story is perhaps best captured in the documentary film The Sci-Fi Boys.

John W. Campbell (author of Chapter Six) profoundly shaped the science fiction genre as the editor of Astounding Science Fiction and its successors from 1937 until his death in 1971.  In his first months as editor, he published the first professional stories by Lester del Rey, A. E. van Vogt, Robert Heinlein and Theodore Sturgeon – resulting in what many regard as the beginning of the “Golden Age of Science Fiction.”

Mortimer Weisinger (Associate Editor) founded (with Julius Schwartz) first-ever literary agency specializing in science fiction, with several Cosmos authors as clients.  He was named editor of Thrilling Wonder Stories and other pulps in 1936, where he published two chapters of Cosmos as standalone stories.  In March of 1941 he joined the company that was to become DC Comics, and over the succeeding 30 years he was responsible for editing Superman and Batman, and the creation of Aquaman, Green Arrow and other characters in the DC universe.

The goal of this project is to give some sense of what it must have been like to read each installment in the context of SFD.  The relevant letters from readers and other snippets of content from the ‘zine will be added.  Each chapter has a companion page that highlights extracts from the issue in which it appeared.  Please visit these!  They add lots of richness and context to the story.  The images on this site are all high-resolution.  Click on them to see the details.

Some of the correspondence between the editors and authors of Cosmos has survived, primarily in various university archives.  These letters vividly bring to life the people and the period associated with the novel.  Unique to this site, those that have been found to date can be seen here.  The search continues for more.

Any and all input from interested and/or informed parties is welcome.  To read next, I suggest:

Who am I, and why am I doing this?
How Cosmos came to be
Notes on the process and text

Or – head straight to Chapter One of Cosmos!